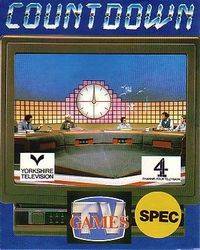 Countdown was a computer game developed in 1984 and released for the ZX Spectrum, Commodore 64 and BBC B platforms in 1986 by the company Macsen, a British software developer. It was seen as a competent game, though its dictionary was limited (contestants often had to verify their own words) and rounds could be chosen that were all consonants or all vowels (although in fairness the rules regarding letter selections had yet to be instituted).