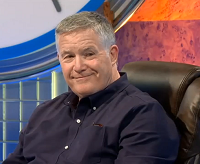 Brendan Russell-Cooper was a contestant in Series 82. He's a Retired Business Improvement Manager for Australian Post, and splits his time between Sydney and Bradford.

Brendan was the first player to win a game since the 2020 COVID-19 hiatus. In his second victory, he became the first contestant to solve a digitally-animated conundrum. He then won three more games before a defeat in his sixth appearance ended his run.