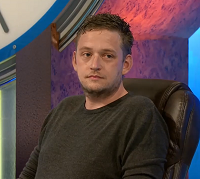 Daniel Jonathan was a contestant in Series 82 and Series 83. He's a Full-Time Carer from Haslingden, Lancashire.

Daniel first appeared on 4 December 2020 against Mike Corcoran, where he scored his first points with COMPANIED for nine, and won with 98 points to Corcoran's 78. He then won the last three heat games of Series 82, and was placed aside for the series finals. He returned to Countdown on 4 January 2021 to continue his run in Series 83, where in a reversal of fortune, his run was terminated by Paul Gaskell.