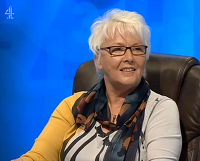 Evadne Fisher was a contestant in Series 82. She is an Actress and Teacher in Speech and Drama from Nottingham. She is also a well-known (in London) former continuity announcer for Thames Television in the 1980s, until the company ceased broadcasting in 1992.