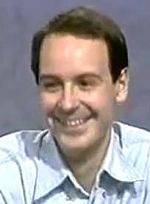 James Martin was a semi-finalist from Series 34.

He won the final eight heat games of the series to become the series's only octochamp and #1 seed for the final stages. He beat Norman Metcalfe in the quarter-finals before losing to Harshan Lamabadusuriya in the semis. Martin played in Championship of Champions IX, beating the tournament's only undefeated player Ray McPhie in the first round, before losing to eventual winner Natascha Kearsey in the quarter-finals by a single point.

Martin is probably best remembered for his fifth heat game against Gerald Foster, and specifically the first numbers round. The starting numbers were 25, 50, 75, 100, 3 and 6, and the target was 952. His method was:

His brother is Edward Martin, who appeared five years earlier in Series 24 and won the ABSP UK National Scrabble Championship in 2018.