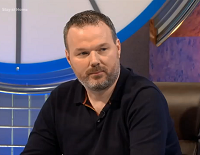 John Doherty was a contestant in Series 82. He's a Mortgage and Protection Advisor who lives in Castledawson in Co. Derry, but is originally from Dublin. He became an Apterite after filming.