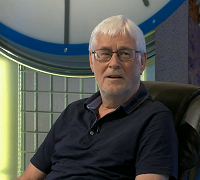 Robin Johnson was an octochamp in Series 79. He's a retiree from Wimborne, Dorset.

He debuted on 20 September 2018 against Greg Purling. He won with a 10 point lead and then produced 7 more victories including two centuries and 4 scores in the 90s. In his last game, he played a close run contest but retained the lead by spotting the nine-letter word TERMINATE and getting his first conundrum.

Before taking part, when he applied for the programme, he told the producers that he was not available in September, having already made arrangements for a significant wedding anniversary. Despite having that information they still scheduled him for the recordings in May. He had no idea, before taking part in May that September would be when the finals were to be recorded. Consequently, he did not play in the finals stage, and did not play in the finals of Series 80 either, as is normally the precedent when a contestant cannot attend the finals. He is the first octochamp to date to have never contested the quarter-finals. Having qualified for the quarter-finals he certainly would have taken part had they recorded at any other time.

Retrieved from "https://wiki.apterous.org/Robin_Johnson"
Categories: Contestants in Series 79 | Teapot owners | Octochamps of the 15 round era | Unbeaten contestants