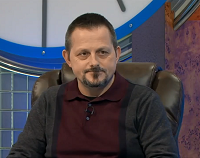 Thomas Fairfield was a contestant in Series 82. He's a Retired Administrator from Belfast. He was also an ex-Football Referee at a Continental level, notably refereeing UEFA European Qualifiers and UEFA Club Competition games, he says the most daunting game he has refereed was a UEFA Europa League game at Giuseppe-Meazza-Stadium in Milan, between AC Milan and VFL Wolfsburg.