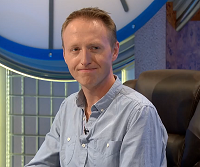 Adam Rolston was an octochamp in Series 79.

Rolston started his run against Apterite Steve Rush and won the game with 9 points ahead of Rush with 75 points. He then won a further 7 games to become the first octochamp of the series.

Rolston returned for the series finals as number 7 seed pitted against number 2 seed Mike Daysley. The pair were level for the first half of the game but Daysley later picked up speed. Rolston fought back hard but the game eventually finished 104 to 58, leaving Rolston to bow out to his first defeat.

He is a screenwriter and director from Twickenham, who produced, among others, the 2016 film A Street Cat Named Bob. His parents are the actors Mark Rolston and Sally Hughes.

Retrieved from "https://wiki.apterous.org/Adam_Rolston"
Categories: Contestants in Series 79 | Teapot owners | Octochamps of the 15 round era | Finalists