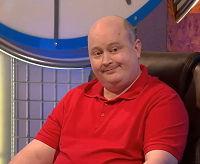 Adrian Fletcher was a contestant and octochamp in Series 85. He worked in a public-facing IT role and lived in Kensington, though originally hailed from Warrington. He became an Apterite after filming his preliminaries.

Fletcher began his Countdown campaign in the second episode of Series 85, in which he prevailed over Niclas Want by 23 points. Fletcher then trounced over the opposition with a century in his second game and followed this with five more wins with scores in the 80s and 90s. In his last preliminary match, his bid for octochampdom was jeopardised when David Wevill spotted HEIRLOOM to claw to within 10 points behind. This margin remained by the crucial conundrum, which Fletcher buzzed in to but gave no answer, and Wevill solved it to level the scoreline at 101 points a piece. Fortunately, Fletcher quickly unravelled the tie-break conundrum to confirm octochamp status, and wrap up with a total of 757 points (not including the 10 from the tie-breaker). His Countdown journey finally came to an end in his quarter-final match after being outplayed by No. 4 seed Ryan Carlsen. Fletcher amassed an overall total of 820 points in his run.

* includes 10 points from a tie-break conundrum
Retrieved from "https://wiki.apterous.org/index.php?title=Adrian_Fletcher&oldid=150586"
Categories: