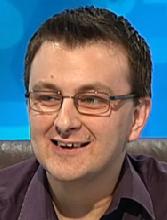 Chris Marshall was an octochamp in Series 67. He is also an Apterite and the treasurer for FOCAL.

Despite not scoring a century, Marshall still achieved octochamp status and returned for the finals as number 7 seed, where he lost to David Barnard. During his run, Marshall beat Scrabble player Karl Kwiatkowski.

4 years after his appearances, Marshall made a reappearance as the audience member who solved the conundrum during the last Series 75 quarter-final.