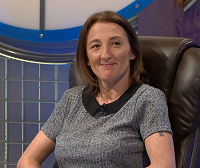 Corrina Attwood was an octochamp in Series 81. She is a full-time mum from Ramsgate. She became an Apterite after recording.

She debuted on 29 July 2019 and won against Philip Catton with a strong 93 points. She followed this victory with 7 more wins including one century, and became the third octochamp of the series with a cumulative score of 681 points. However, with another 8 octochamps in her series having outscored her total, she ultimately finished in 9th place unbeaten and became the first ever octochamp to fail to qualify for the series finals, although she was briefly mentioned by Nick Hewer as a consolation during the first quarter-final.

Retrieved from "https://wiki.apterous.org/Corrina_Attwood"
Categories: Contestants in Series 81 | Teapot owners | Octochamps of the 15 round era | Unbeaten contestants