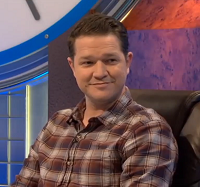 David Kempshall was an octochamp in Series 82. He's a Marketing Director from Stafford. He became an Apterite after recording his heat games.

Kempshall made his debut on 22 April 2020 against Hussain Mulla, winning with a score of 107. He followed this with seven more victories and another two centuries. Eventually, in the last episode before the 2020 COVID-19 hiatus, he wrapped his heat run with a total of 732 points.

Kempshall returned to Countdown for the series finals as the number 8 seed on 10 December 2020, against the number one seed Luke Johnson-Davies in the first quarter-final. Johnson-Davies pulled away early in the game, but Kempshall kept within his reach, although he discounted a potential nine letter word which wasn't in the dictionary. However both players found DETAILING for nine in the last letter round, and scored points in all four number rounds, before Luke emerged victorious with a max performance of 136 points, relegating Kempshall to his first defeat with 89 points. Kempshall amassed 821 points overall during his series run.