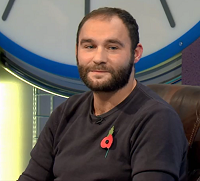 Graeme Staples was an octochamp in Series 77.

He made his début on 10 November 2017 against James Riddell; despite the six wins Riddell already had under his belt, Staples overcame him comfortably, scoring his only century in the process. He went on to amass 678 total points and seven more wins, including a controversial high-scoring crucial conundrum victory over Beth Walker, meaning that he entered the finals leaderboard at the #7 spot and remained unbeaten to this point.

Staples returned for the series finals in December as #8 seed. Here, he was finally outclassed by the letters and numbers prowess of the #1-ranked Apterite Tom Chafer-Cook, suffering his only ever defeat, though he did manage to overcome Chafer-Cook in the final round by unscrambling the conundrum ONMYCHIPS.