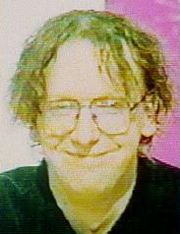 Jim Bentley was an octochamp in Series 50.

He overcame the sitting champion Brian McKeon by just 9 points before going on to win 7 more games, including a score of 112 against Richard Francis, winning by 50 points. He went into the finals as #4 seed and faced #5 seed Adam Laws. In a very close game, they went into the conundrum NIPPERAID with 78 points each, but it was Laws that solved DRAINPIPE in 11 seconds to go onto the semi-final against #1 seed Chris Cummins.

Since appearing on Countdown, Bentley has appeared at Countdown in Lincoln in 2005, 2006, 2008, 2010, 2011 and 2012, and is a moderator on the C4countdown forum. He's well known for posting the first ever recap on both the original C4countdown mailing list and the forum, and for compiling a comprehensive dictionary for online gaming known as "JimDic".

Retrieved from "https://wiki.apterous.org/Jim_Bentley"
Categories: Finalists | Octochamps of the 15 round era | Contestants in Series 50 | Teapot owners