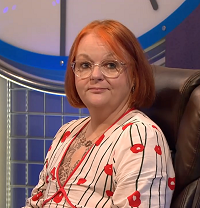 Kim Coltman was a contestant in Series 84 and 85. She is a florist from Nottingham.

Coltman appeared in the last two preliminary games of Series 84, and was placed aside for the series finals with 152 points. She returned to the show on 3 January 2022, where she appeared rather rusty and, despite striking back to near distance with a spot of UNPLEATED for nine, she was defeated by Niclas Want.