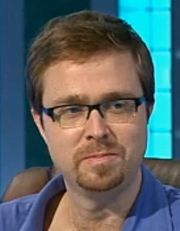 Michael Chadwick was a contestant and finals qualifier in Series 63.

Chadwick accumulated 706 points, enough to return for the Series 63 finals as #8 seed. However, he was abroad and could not attend the finals, so he was replaced by Peter Godwin who got one fewer point than he did. In terms of win and point counts, Chadwick was the most successful contestant to have ever declined a finals invitation, until octochamp Annie Humphries had to withdraw in Series 75 (although she did return for the Series 76 finals).