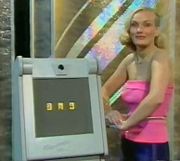 Robena Sharp was the "numbers girl" on the Calendar Countdown Pilots. Her solitary role was to be wheeled out twice a show to put the numbers tiles up and pull a lever. She did not speak, with Richard Whiteley reading out the choices, presumably in an exercise of saving money, which is odd considering that a better money-saving exercise would have been to have Cathy Hytner do both jobs.

Amazingly, the concept of a numbers girl survived with Beverley Isherwood for a full two years before the concept was finally axed.