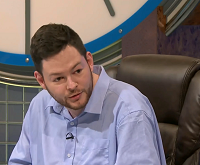 Turnbull debuted on 21 March 2019 against Jane Basford, and outran Basford with a 96 – 34 win. Turnbull then put in 7 more decent performances including a tie break conundrum in his sixth heat game. He ultimately rounded off his heat run with 619 points – the smallest ever for an octochamp in the 15 round format – and returned for the series finals in June 2019 as the No. 6 seed. Here he was drawn against the No. 3 seed, fellow octochamp Brendan Whitehurst, and outplayed the latter with darrenic spots of EARWIGS and HOOLIGAN early on, holding a 20-point lead at one stage of the game. However, Whitehurst then mounted a comeback in the third "half" to regain a 1-point lead, which proved to win him the game after neither player unscrambled the crucial conundrum RINGACHED.

* includes 10 points from a tie-break conundrum
Retrieved from "https://wiki.apterous.org/Steven_Turnbull"
Categories: Contestants in Series 80 | Teapot owners | Octochamps of the 15 round era | Finalists