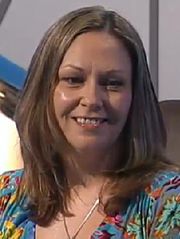 Suzi Purcell was an octochamp in Series 66.

In 2014, she made her co-event debut at COLIN X, under her married name, Suzi Player. In 2020, she re-appeared on Ken Bruce's Radio 2 quiz "Popmaster", in which she won the top prize of a digital radio.

Retrieved from "https://wiki.apterous.org/Suzi_Purcell"
Categories: Contestants in Series 66 | Teapot owners | Octochamps of the 15 round era | Finalists