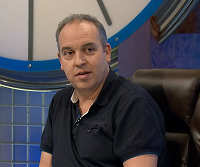 Tom Silverlock was an octochamp in Series 81. He's an Electrical Engineer from Camden.

Making his debut in the third show of the series, he won his first match against two game winner Colin Beattie on a crucial conundrum. Silverlock then put in 7 more decent performances, including one century in his seventh game. He ultimately wrapped his run with 704 points to become the first octochamp of the series.

Silverlock returned for the finals in December 2019 as the 7th seed. He came up against number 2 seed Jamie Wing. After a slow start, Silverlock played scoring very closely to Wing, but Wing pulled away with a spot of the nine letter word ROUTINISE. Silverlock, however, solved the conundrum RUBLAPDOG into PLUGBOARD which came as a surprise as he thought he had made it up, before bowing out in his first defeat. Silverlock garnered a total of 782 points in his run.

Since recording his heat shows, he has become an Apterite.