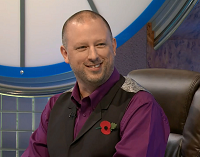 Alan Duval was an octochamp in Series 79. He is an Entrepreneur from London, but is originally from New Zealand. He is also an Apterite.

Duval made his debut on November 6 2018 against Chris Sturdy. He won the game on a crucial conundrum and went on to win with another crucial conundrum on his second day. He also outran his opponents thanks to his preferred 3 large and 3 small number picks during the number rounds. In his last game, he ran ahead early but his opponent Lewis Jones made a strong comeback by spotting the nine letter word TELESCOPE, which Duval missed as he had the six letter word CLOSET. However Duval outran Jones and became the seventh octochamp of the series. He was provisionally ranked #6 seed, for the series finals in December 2018.

The New Zealander returned for the series finals in December 2018 as the number 6 seed. He was pitted against number 3 seed Andrew Jackson. The pair fought hard with Duval taking the lead early on but Jackson fought back, thanks to his number skills and eventually took the lead. However the game eventually went to a crucial conundrum and Duval who was 8 points behind successfully unravelled the crucial conundrum to take the win and played in the semi-finals.

In his semi-final, he was pitted against number 2 seed Mike Daysley. The pair started level until the 2nd half when Duval took a 7 point lead thanks to his 3 large and 3 small number picks. However in the third half, Duval slowed down and eventually Mike Daysley ran ahead and solved the conundrum, and Duval took his first defeat.

Retrieved from "https://wiki.apterous.org/Alan_Duval"
Categories: Contestants in Series 79 | Teapot owners | Octochamps of the 15 round era | Finalists