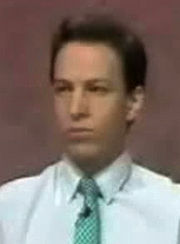 Andy in his quarter-final episode.

Andy Cusworth was a finalist in Series 29.

He is a keen Scrabble player, who also enjoys compiling and solving crosswords, and has contributed to the Countdown Puzzle Magazines.

Retrieved from "https://wiki.apterous.org/Andy_Cusworth"
Categories: Contestants in Series 29 | Finalists | Contestants on other game shows