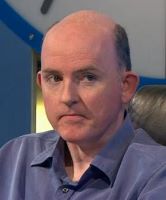 Gerry Tynan was an octochamp in Series 72. He is also an Apterite.

Tynan began his run by defeating Series 43 quarter-finalist Kate Ritchie and completed his octorun with 6 centuries to become the number 2 seed. Despite taking a 14 point lead in the opening two rounds of his quarter-final against Steve Redfern, the match stayed tight and Tynan did not confirm his victory until the final numbers game. His semi-final against Tracey Mills was also tight, however Mills edged ahead and was victorious, ending Tynan's run.