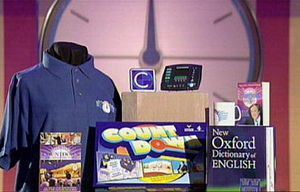 The goody bag used from January 2021 to June 2021. At the start of Series 84, Word Perfect was replaced by the return of Dent's Modern Tribes.

The goody bag is the colloquial term for the prizes given to contestants after they have appeared on Countdown. The prizes are different depending on whether the player won a game, or even made the Series finals. The current goody bag as of 29 June 2021 includes:

Since December 1998, those who also win at least one game receive the Countdown teapot.

Finalists and Championship of Champions participants receive a cut-glass trophy (in Championship of Champions XIII the trophy had a small clock inside). Series champions receive a hexagon-based cut-glass trophy. They also received the full Oxford English Dictionary until Series 83, after which the prize was axed by Countdown due to the books being out of date. From Series 63, the dictionaries were no longer gold-leaved. However, the champion also receives a laptop computer (currently a MacBook Pro).