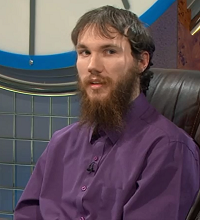 John Cowen was an octochamp in Series 77 and a participant in Championship of Champions XV. He is a maths graduate from Morecambe. He joined Apterous after recording his finals appearances. He also knows some Russian.

Cowen debuted on 19 July 2017 in impressive fashion, scoring the third highest total of the whole series on his debut as well as spotting the 9-letter word SPREADING. He missed out on joining the 800 club by 1 point, but nonetheless achieved four centuries and performed well in the numbers rounds in which he chose 6 small in every pick.

As a result of his preliminary success, Cowen returned for the Series 77 finals in December as #3 seed. In his quarter-final match, he thrashed fellow unbeaten player Michael Pfeffer, picking out the nine ANTINODES to prevail 105 – 49. In the semi-finals, he faced Bradley Horrocks, another player who picked 6 small most of the time (although he instead opted for 3 large there). However, his run came to an end after he had an incorrect solution to his final 6 small selection, meaning a crucial conundrum was avoided and gave the former the win by then.

Cowen returned to Countdown in January 2019 for the Championship of Champions XV where he played against Series 74 runner-up Ann Dibben in the second preliminary round of the tournament. He broke away and took the lead after perfectly solving his first 6 small selection. However, Dibben fought back to the point it was enough to force a crucial conundrum. Ultimately, he prevailed by unscrambling SHYBIRDIE in a second. He took on Bradley Horrocks in the Quarter-finals. The pair played a close run game and eventually Horrocks secured a second victory over Cowen with 99 points to Cowen's 96 points after both players gave incorrect answers to the crucial conundrum.

Cowen made his Co-event debut in Leeds in 2018 where he reunited with Horrocks.

Retrieved from "https://wiki.apterous.org/John_Cowen"
Categories: Contestants in Series 77 | Contestants in Championship of Champions XV | Teapot owners | Octochamps of the 15 round era | Finalists