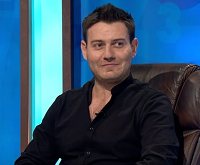 Michael Pfeffer was an octochamp in Series 77.

A sports analyst from Manchester, he debuted in the champion's chair following John Cowen's octochamp run. After a close first game against Paul Ellis, he scored three centuries including a high of 119 against Scrabbler Jack Anscomb. Though he had a low-scoring scrap in his final game, he came through and garnered a cumulative total of 770 points to become the third octochamp of the series in just 27 shows. He did, however, had SHAMER incorrectly disallowed in his seventh match, so his total should have been 776.

Pfeffer qualified for the Series 77 finals as #6 seed, and returned in December to face fellow unbeaten player John Cowen. However, he came unstuck fairly early on, being beaten by Cowen's impossible 6-small numbers picks as well as his nine ANTINODES, meaning that the #3 seed ultimately prevailed 105 – 49.

Retrieved from "https://wiki.apterous.org/Michael_Pfeffer"
Categories: Contestants in Series 77 | Teapot owners | Octochamps of the 15 round era | Finalists