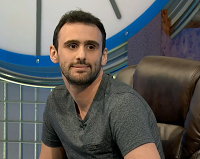 Lewis Carson was a contestant in Series 79.

After a short spell on Apterous, Carson made his debut on the fifth show on the series. On his first appearance, he outran previous Series 67 contestant Jodine Lawrence thanks to using his preferred 4 large pick to win the last numbers game and avoid a crucial conundrum. Despite not scoring a century, he won a further six shows, including a top score of 95. His potential octochamp run, however, came to a dramatic end when he was beaten on a crucial conundrum by Sarah Harper in a very close encounter.

Unfortunately, his seven wins were not enough to qualify for the finals, as too many octochamps had pushed Carson out of the top 8. This also made him the first person with 7 wins since Julia Wilkinson to not make it to the finals in 16 years since Series 47.