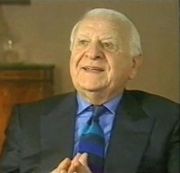 Marcel Stellman on A Tribute to Countdown: 3000 and Counting

Marcel Stellman is a Belgian record executive who brought the format of French show Des chiffres et des lettres to Britain, where it ultimately became Countdown. He also wrote a number of famous songs, including the lyrics to Tulips from Amsterdam, and film numbers, including I Will Live My Life for You from Ghosts of Mississippi.