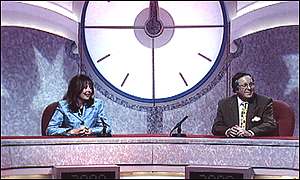 You don't need a caption to tell you who these are, do you?

Countdown: The 2000th Edition was a retrospective programme broadcast immediately after Episode 2012 on Friday 23 May 1997. It should not be confused with the actual Episode 2000, which was a regular show broadcast two weeks earlier.

The programme was hosted by William G. Stewart and recorded at the Greenwood Theatre in London on a replica of the Countdown set (though the "clock" was actually painted on a set of doors through which several of the guests appeared). Richard Whiteley and Carol Vorderman sat in the "contestants' seats" while various people came on to talk about the show, including, Marcel Stellman, Philip Franks, Cecil Korer, Joyce Cansfield, Harvey Freeman, Allan Saldanha, and Jo Brand (her first appearance on Countdown or a Countdown-related programme). Denis Norden presented an insert featuring cock-ups from the show. The audience was made up of past contestants, and Dictionary Corner guests including Nigel Rees and Gyles Brandreth, plus composer Alan Hawkshaw. There were also video inserts from Lord King, Sir Tim Rice, Armand Jammot, Lord Attenborough, and various viewers, plus a poem from the Edinburgh Countdown Club.

The show was obviously heavily edited for television, as several of the guests were not even shown speaking.

This episode was repeated on 9 July 1997 following the cancellation of Episode 2045.