A Tribute to Countdown: 3000 and Counting 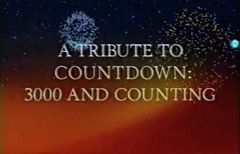 A Tribute to Countdown: 3000 and Counting was a special 35-minute documentary which aired Friday 27 April 2001, immediately after Episode 3000. It featured a potted history of the show (which gave the misleading impression that nothing whatsoever had changed in 3000 episodes, and didn't even acknowledge the existence of Cathy Hytner), and some rather unlikely Countdown fans such as Chris Moyles and Arthur Smith talking about the show.