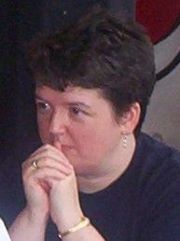 Now known as Nuala O'Rourke, she is also a competitive Scrabble player, and is the widow of Series 44 contestant and fellow Scrabbler Mike O'Rourke. Since his passing in March 2012, she has organised an annual tournament in memory of him.