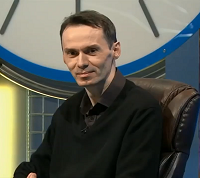 Samir Pilica in the Championship of Champions XIV.

Samir Pilica was an octochamp and semi-finalist in Series 70, and a participant in Championship of Champions XIV. He is also an Apterite. Born in modern-day Bosnia and Herzegovina, Pilica was one of, if not the, first ever octochamp to not have English as his first language.

Pilica started his run with a century over fellow finalist Sean Fletcher, and went on to achieve a cumulative total of 801 points and become number 2 seed for the finals.

After resoundingly defeating Priscilla Munday with 12 maxes in his quarter-final, Pilica lost to number 3 seed Andy Naylor in a close semi-final battle.

Pilica returned in 2016 for Championship of Champions XIV but lost 127 – 88 in the first round to Series 69 champion Callum Todd.

Retrieved from "https://wiki.apterous.org/Samir_Pilica"
Categories: Contestants in Series 70 | Contestants in Championship of Champions XIV | Teapot owners | Octochamps of the 15 round era | Finalists