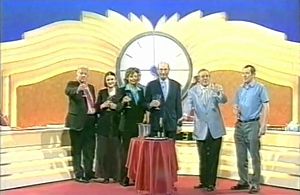 This episode was specifically billed as the 3000th episode, and on its original transmission, it was followed by the documentary A Tribute to Countdown: 3000 and Counting. This is the only instance to date in which a "thousandth" episode of Countdown has actually been celebrated on the correct day; all others have deviated from the correct day, sometimes by several weeks (e.g., the episode billed as the "6000th" was actually Episode 5987).