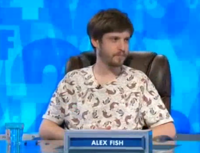 Alex Fish was a contestant in Series 50 and an octochamp in Series 69.

In his first appearance, he was defeated by eventual semi-finalist Stuart Solomons. He began a new run 10 years later with a consistent run that never saw him score below 90 points, and only narrowly missed out on joining the 800 club. Fish returned as number 5 seed to play Bradley Cates but was defeated 116 – 85.