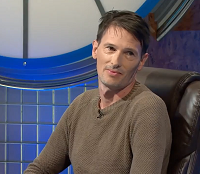 Paul Anderson was a contestant in Series 81. He's a Full-Time Dad and Part-Time Musician from Dublin, but is originally from Limavady in Northern Ireland. He is also an Apterite and a moderator on Countdowners. He made his Co:Event debut at Co:Dub 2019.

Anderson is co-host of the Focal Talk podcast, along with Series 69 champion Callum Todd. In 2020, during a time of international lockdowns due to a coronavirus pandemic, Anderson launched ZoomDown, a series of games of Countdown played over the Zoom video call software broadcast live on the Focal Talk YouTube channel.

* includes 10 points from a tie-break conundrum
Retrieved from "https://wiki.apterous.org/index.php?title=Paul_Anderson&oldid=143959"
Categories: