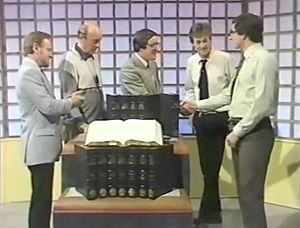 The prize presentation for the Grand Final of Series 7.

Series 7 ran from October 1985 to December 1985. Episodes were broadcast at 4:30pm. The seventh of 53 series presented by Richard Whiteley, it was won by Ian Bebbington. The runner-up prize was £100 of book tokens.

Numbers after "+" signs in the Wins column represent drawn games.
Between Series 3 and Series 20, players were ranked by total number of points, including winning and drawing scores, but not losing ones.
NOTE 1: Marion Johnstone, with two wins and 109 points, would have been the #8 seed, but for unknown reasons, she didn't return for the finals, so Gary Franks took her place.
NOTE 2: Due to a rule that was in place at the time, win and point totals were reset if a player crossed a boundary between series. In addition to becoming an octochamp in Series 7, Clive Freedman had also won one additional game in Series 6.