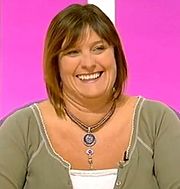 Sue Sanders enjoying herself on the show. 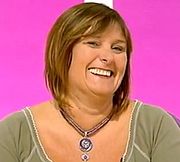 Sue Sanders still enjoying herself on the show.

Sue Sanders was a contestant in Series 55. She is a garden designer from Whitstable, Kent.

She also appeared on Wogan's Perfect Recall in 2009, this time winning her game...and a small stash of cash which she spent failing to see the Northern Lights. Other shows she has been on include The People's Quiz "Wildcard" series, and in November 2010, Pointless, in which she partnered Series 62 contestant Phil Reynolds.

In October 2009, Sue attended the unofficial CoLei2 tournament, although not as a registered participant due to prior commitments in the morning. In January 2010, she went to COLIN 2010, this time as a competitor. She once again competed at CoLei4 in 2011. She then appeared at CobliviLon in 2012.

Retrieved from "https://wiki.apterous.org/Sue_Sanders"
Categories: Contestants in Series 55 | Contestants on other game shows