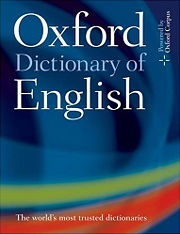 The Oxford Dictionary of English was Countdown's source dictionary used to judge words from Series 43 to Series 70. Each updated edition typically added a number of new words, removes a few and clarifies the validity of some inflections (see Letters round rules). It was replaced by use of the Premium version of Oxford Dictionaries Online (ODO) on a laptop in Series 71, which also removed the pencam. The third and last edition remains visible on the host's desk and part of the Countdown goody bag to this day, and is also still in use on 8 Out of 10 Cats Does Countdown.

From the beginning of Series 71 in June 2014, the paper dictionary and pencam was replaced with a laptop. The validity of words is now determined using the Premium version of Oxford Dictionaries Online (ODO). A free version of ODO, branded as 'Lexico' since [1] is cross-referenced by the show's director if a word is invalid according to ODO Premium (this is not necessarily seen in the episode's final cut). If the word is valid according to Lexico, then it is accepted. While both dictionaries operate a slightly different search logarithm, the Premium version of ODO can only be accessed via an annual subscription fee.

If a word can be found by searching for it under the British English section of ODO Premium, and "Entry from US English dictionary" appears underneath the word's phonetic spelling, it will be allowed; an example of this is COQUI. These cannot be found under UK Dictionary in Lexico. Premium is therefore more voluminous than Lexico, and also more accurate as it explicitly labels some mass nouns as a count noun, and some verbs ending with -ING "as noun".

ODO is updated with thousands of new words four times per year. In order to keep in sync with ODO and dictionary rules, the Apterous website's dictionary is updated quarterly by including and excluding words which would or would not be considered allowable on Countdown.

Dan McColm, the first series champion to be crowned in the ODO era, came up with very modern words included in the dictionary such as WHATEV, and in his last game of his octochamp run spotted that the conundrum BOBHOPTOM became PHOTOBOMB, a word that trended highly in 2014. Elliott Mellor, Luke Johnson-Davies and Sam Cappleman-Lynes have also been noted for finding obscure ODO words that could otherwise not be found in ODE.