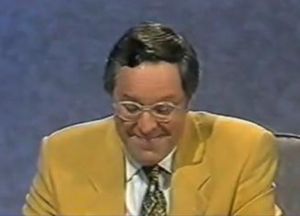 Richard's face makes his reservations about the new clock music all too clear. He even described it as "sultry".

Series 31 ran from January 1996 to March 1996. The thirty-first of 53 series presented by Richard Whiteley, it was won by David Acton.

This was the series which implemented the 'extra intensity' clock music, which was soon replaced with the original tune. It also introduced the COD9 dictionary.

Glyn Wigley, Dominic Moyes, Maria Thomson, and Anthony Jenkin are the only people to have won a game with the jazzed up clock music.