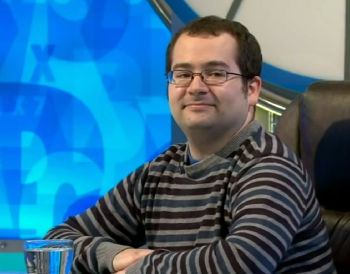 Elliott Mack in his second appearance in Series 76.

Elliott Mack was a contestant in Series 61 and an octochamp in Series 76.

He debuted on 20 November 2009, losing on a crucial conundrum to five-time winner Charlie Khoo. He returned eight years later, this time prevailing in a close game against Apterite Dave Ryan with a century, and went on to seal seven more victories with scores over 90 in one of the show's most difficult octochamp runs involving three crucial conundrums. He proved to be a consistent conundrum-solver, and became only the tenth contestant in Countdown history to have solved all eight conundrums in their preliminary games.

Mack's 804 preliminary points secured him the #4 seed spot in the Series 76 quarter-finals, where he faced Series 75 returnee Annie Humphries. The game was close, with his spot of INPUTTED beating the opponent, but Mack was beaten in three letters rounds. He ultimately suffered his second defeat on Countdown to Humphries, losing 94 – 88. However, he did get the last word here by solving his ninth consecutive conundrum, ITESTDUET.