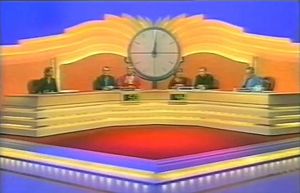 The unusual set-up for this special show.

Episode 2874 was broadcast on 2 November 2000, and was a special episode to celebrate Countdown's 18th birthday.

No additional Dictionary Corner guests were featured, as it was not required with the presence of Brandreth and Brand. This episode was also the final time Nyman appeared on Countdown, having not made an appearance as lexicographer since May of that year, and leaving the production team two years later.

Memorably, Carol Vorderman was frustrated at her inability to solve the numbers games and walked off the set before the conundrum.

NOTE: The original target for Round 4 was 197, but Richard Whiteley made an "executive decision" that it was too easy, and ordered that the button should be pressed again.