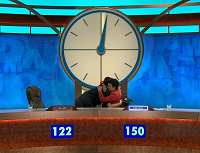 Episode 6991 was broadcast on 17 January 2019, and was the fourth quarter-final of Championship of Champions XV.

This episode broke several records on Countdown. Siempre's score of 150 was the highest ever in the history of Countdown at the time, breaking Julian Fell and Conor Travers's records of 146 set in December 2002 and March 2013 respectively (this would be broken exactly four months later by Elliott Mellor's score of 152 in May 2019). Furthermore, Carey's score of 122 is the second-highest losing score ever, behind Andy Platt's losing score of 125 in the previous CoC.

The aggregate score of 272 is the highest in the history of the show, breaking the record set in Travers' game as mentioned above. Siempre's score was the highest ever achieved by just spotting three nine-letter words until Mellor shattered this record exactly four months later in the same episode mentioned above.