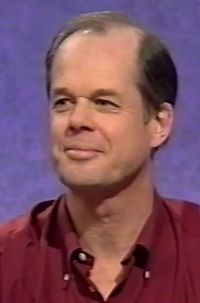 Leaney in his seventh edition.

Glynn Leaney was a contestant in Series 39 and the runner-up of Series 40.

Leaney won six games before the start of the Series 39 finals; he was offered the opportunity to carry over to the next series rather than enter the finals unbeaten as #7 seed (as there was some uncertainty about the final seedings board at the time of the end of filming of the heats, owing to #6 seed Vicky Smith not being able to make the studio dates for the quarter-finals), and he elected to do so.

Leaney's son Chris would go on to appear on Countdown in Series 75 in 2016. At the end of Chris's first game, Glynn made a brief cameo appearance.