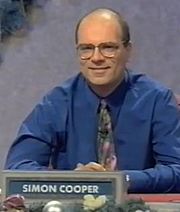 Simon Cooper on a rather festive set during his series final.

Simon Cooper was the runner-up of Series 41. He was a Conference Centre Manager from St. Neot's, Cambridgeshire.

He first appeared on 14 September 1999, beating Steve Clark 47 – 40. He won a further seven games to become an octochamp with an impressive points total of 482, however in that series it was only good enough for #3 seed. Simon beat Margaret Foster and Gary Woodward on his way to the final against Scott Mearns. Unfortunately for Simon, Scott's blistering form that he had displayed throughout the series continued unabated. Simon lost the game 81 – 73 and had to settle for the runner-up's prize. Simon returned the following week for Championship of Champions X, but lost in the first round to Terence English.