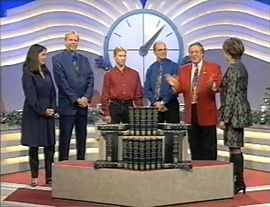 Scott Mearns, the series winner with his dictionaries.

Series 41 ran from 28 June to 25 December 1999. The forty-first of 53 series presented by Richard Whiteley, it was won by Scott Mearns. Richard Whiteley coined the word octochamp in this series, which had six of them – a record for all the series in the 9 round format.

This is known to be one of the best contested series in the 9 round era: an analysis provided by Eoin Jackson and published to c4countdown in 2020 suggested this was the third-best series of all time: between them, the eight finalists achieved a 79% raw score, which not only is the highest in the 9 round era, but the highest prior to the establishment of Apterous and other training aids. This is further indicated by Simon Cooper's octotal of 482 only being good enough for third seed: in almost every other series, this would have been high enough for the number one seeding position. Cooper, Lucy Roberts, and Mearns also made it into the 480 club: this being the only series where two people, let alone three, made it into that club. Sanjay Mazumder and Melvin Hetherington, with 479 and 478 points respectively, only just missed out.

In the first quarter-final, Mearns pulled out a big lead over Rory Dunlop to take a 21-point lead after Round 5, and therein Dunlop was able to match Mearns, before spotting the conundrum TOMPIEMAN in 20 seconds to leave the winning margin of 11 points closer than the game suggested. A major shock took place in the second quarter-final when Gary "Carol's toyboy" Woodward defeated number two seed Lucy Roberts by seven points, in a tight see-sawing match. Woodward started the stronger with EXPLOIT and AUDITED allowing him to pull out a 14-point lead at the break, before Roberts halved the deficit with ENIGMAS, before Woodward was able to win the game before the conundrum by spotting the final numbers game. Roberts was able to spot the conundrum in under three seconds, but Woodward had prevailed to knock out the number-two seed and then third-highest scoring octochamp of all time. In the third quarter-final, Simon Cooper was able to defeat Margaret Foster thanks mainly down to picking up 14 points off the numbers games to Foster's zero. Although Foster was able to beat Cooper on a letters round and take the game to a crucial conundrum, Cooper unravelled LASTMINUT in anything but the last minute to move into the semi-finals. The fourth quarter-final was a game of two halves, as starting with the nine IMPLANTED led to a half-time score of 41 – 35, with Mazumder having played a perfect first half. Hetherington, however, stole the lead immediately after the break with CHAPERONS and extending that lead with ENERGY to win the game without the need of a crucial conundrum.

This meant Mearns played Hetherington in the first semi-final. Mearns was able to take an early seven-point lead with BOATING, but therein each round was matched, and with the gap still at seven points going into the conundrum, a major upset was potentially on the cards, but Mearns unscrambled HOTWARMER in two seconds to book his place in the Christmas Day final. In the other semi-final, between Cooper and Woodward, Woodward took an early lead with PATIO, but Cooper's nine-letter-word GELATINES suddenly gave him a 13-point lead, which he extended to 23 points following the first numbers game. The rest of the match was largely uneventful, allowing Cooper to take his place in the final.

A promising letters selection in the first round of the final prompted Mearns to risk MORTALISE ☓, thus giving Cooper an early eight-point lead in the 14-round final, but this deficit was almost instantly overturned when Mearns was able to score the first numbers game spot on. Mearns extended this lead with REMOTE in Round 4 and spotting the first conundrum, PIESNMASH, to lead by 18 points at the halfway stage. Whilst the other four letters games were largely uneventful, Mearns took a further 7 points out of Cooper on the Round 10 numbers game, and whilst Cooper mounted a late comeback with seven points on the final numbers and spotting PARTYNITE, it was too little too late and Mearns won by 81 – 73. Both Mearns and Cooper would return for the Championship of Champions X the following week, but sadly no one from the series would return for the 30th Birthday Championship.