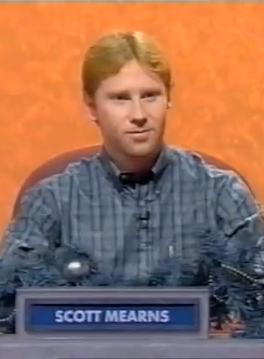 Scott Mearns from Montrose in Scotland was champion of Series 41 and Championship of Champions X. A student at Leeds University when he appeared, Mearns foreshadowed his form on the programme by passing his audition with a 100% score. Famously wanting to "put Montrose on the map", Mearns became an octochamp with an aggregate score of 510, before running out victorious in three relatively tight finals games to win the series. He later returned for the five game Championship of Champions X, wherein he was seeded to automatically reach the semi-final. He defeated Series 39 octochamp Terry Knowles and champion Kate Ogilvie to win the mini-series and claim the title of Countdown's tenth Champion of Champions. Along the way, Mearns demonstrated his prowess with the 6 small selection in numbers rounds. He is arguably one of the best players to have not contested the Supreme Championship nor the 30th Birthday Championship.

He first appeared on Countdown in the very first game of Series 41, beating incumbent champion Bobby Johnson by 80 points to 12 in a phenomenal debut performance that included the nine letter word SERRATING. Johnson had amassed his 12 points by the end of round two and failed to score again throughout the rest of the contest, including having compense ☓ disallowed. Mearns unravelled the conundrum VIPERWEED in little more than a second, offering a preview of what was yet to come. His next five games featured scores of 50+, peaking at 76 in his third heat game against Sarah Houchin. Mearns suffered an uncharacteristically low score in his his penultimate heat game, beating William Brewer 34 – 30, but he outplayed Lesley Millar 61 – 27 to become the first octochamp of Series 41, averaging 63.75 points a game. Having secured the third-highest total of the nine round era, Mearns entered the series finals as #1 seed. (More...)