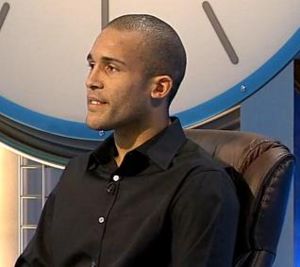 Clarke Carlisle was a contestant in Series 62.

He attracted media attention by being the first Premier League footballer and the third professional footballer to appear as a contestant on Countdown, after Series 59 finalist Neil MacKenzie and Series 61 contestant Adrian Coote.

Two years after appearing as a contestant, Carlisle returned to be Sean Lock's teammate in the special episode, 8 Out of 10 Cats Mashup: The Rematch.

In 2002, he won Britain's Brainiest Footballer, a show hosted by Carol Vorderman, and in 2012, he appeared on a celebrity edition of Only Connect in the same team as Rosie Boycott and Richard Osman.

In December 2014 Carlisle was seriously injured after being involved in a collision with a lorry and was reported to be "fighting for his life". It was later determined that he was drink-driving and it was a suicide attempt. In May 2015, he was banned from driving for three years; his wife, who was involved in the same accident, had divorced him just a few months earlier.

On 15 September 2017, he was reported to be missing in Manchester but was later found safe on the evening of the same day in Liverpool.