Episode 1073 was broadcast on 7 January 1991, and was the second semi-final of Championship of Champions V. 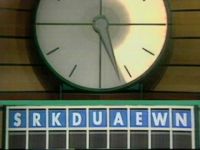 The clock music comes to its conclusion, with Pearse and Corr about to declare WANKERS.

It was from this episode that the often-repeated "pair of wankers" out-take was taken.