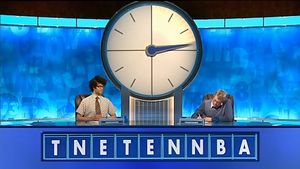 Ayoade as Maurice Moss in The IT Crowd, playing Countdown.

Richard Ayoade was a contestant on 8 Out of 10 Cats Does Countdown. He is an actor, writer and stand-up comedian amongst other talents.

In his most famous role as Maurice Moss on The IT Crowd, Ayoade's character "appeared" on Countdown in 2010. In the episode, Moss famously declares the nine letters TNETENNBA which already "spells" out a word, and breaks many records. Moss is later invited to a secret club called 8+ and forced to play Street Countdown against a jealous former champion, "Negative One", declaring a 16 (OVERNUMEROUSNESS) compared to Negative One's 12, ENORMOUSNESS. The episode featured cameo appearances from Jeff Stelling, Rachel Riley, and Gyles Brandreth.

He eventually made his debut appearance six years later on an actual episode on 22 October 2016 in 8 Out of 10 Cats Does Countdown Series 11, Episode 5. For his sole apperances in 2016 and 2017, he scored three and five respectively. Remarkably the year after, in 2018, he improved dramatically, scoring perfectly in a numbers round and obtained a maximum in a letters round and maintained his performance in 2019, though he could have broken his own record had he not discarded DOGNAP (He would eventually do so almost a year later in 2020).

* Includes 5 points from a bonus game.